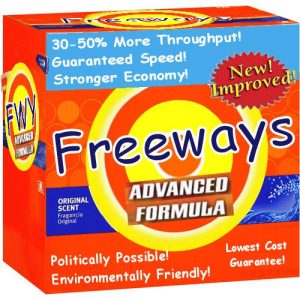 What would a “Successful, Sustainable Freeway” look like? It would be uncongested even in peak hours, but the reliable high speeds would not induce more demand nor contribute to more sprawl. It would do this without needing to ever be widened, and hence would have only maintenance costs rather than “Big Dig” expansion costs.

Sounds too good to be true? It’s becoming more possible all the time. A concept called Managed Motorways will be coming first to Denver then shortly after to Salt Lake, and Metro Analytics is imagining enhancements to that system that could finally help freeways stop working against sustainability. The key aspect of Managed Motorways is enhanced ramp metering, with algorithms to adjust on-ramp wait times to prevent mainline stop-n-go. But like widening, this new way to get speed/capacity gains will induce demand, so it shouldn’t be long before talk of Big Digs returns.

Distance-based congestion pricing can manage demand to available supply, but so far it’s been politically infeasible. Metro has devised a “Congestion Credits” strategy that merges Managed Motorways with Congestion Pricing through a mechanism where many and perhaps most 5-pm drivers could still travel a fully-priced, “all lanes must pay” freeway without having to pay a dime. Majority for free would make congestion pricing much more politically possible, and would also give more reasons to ride transit, travel in off-peaks, etc. for those who would end up paying.

If you have time to read the full article, hopefully you can see what we’re seeing. If you have less time, below are some of the key facts about freeways, Managed Motorways, and how our Congestion Credits system could work. 1-8 describe why freeways fail, and how Managed Motorways can prevent that, at least temporarily. 9-12 highlight our Congestion Credits strategy, which can help a Managed Motorway operate for decades without widening and with much less, if any induced demand. 13-18 discuss potential benefits of the joint MM+CC system.

Contact us via www.MetroAnalytics.com
to discuss, or to arrange a presentation for your technical staff or key stakeholders.